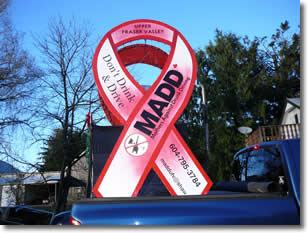 MADD Canada continues to build an effective array of public awareness programs, tools and initiatives to inform Canadians about the dangers and consequences of impaired driving. We strive to present the facts, put a human face on the problem of impaired driving and change risky driving behaviour. Chapters and Community Leaders also engage in public awareness efforts in their local communities.

Our longest running public awareness program is still going strong. Each year, MADD Canada’s iconic red ribbons are distributed across the country to symbolize safe and sober driving over the holiday season and to honour the victims who have lost loved ones or suffered injuries in impaired driving crashes.

Everyone has a responsibility to keep our roads safe. Campaign 911 educates and empowers the public about the right course of action to take if they see a driver they suspect is impaired. By calling 911 to report these drivers to police, individuals are helping take impaired drivers off the roads before a potentially deadly crash occurs.

Find out more about Campaign 911.

Through radio and televisions PSAs and education videos, we hope to make the public more aware of the problem of impaired driving and what they can do to stop it. Our videos featuring victims of impaired driving are powerful and emotional, and go beyond the impaired driving statistics to show what it means to those individuals who have been directly affected.

Find out more about Television and Radio Ads (PSAs).