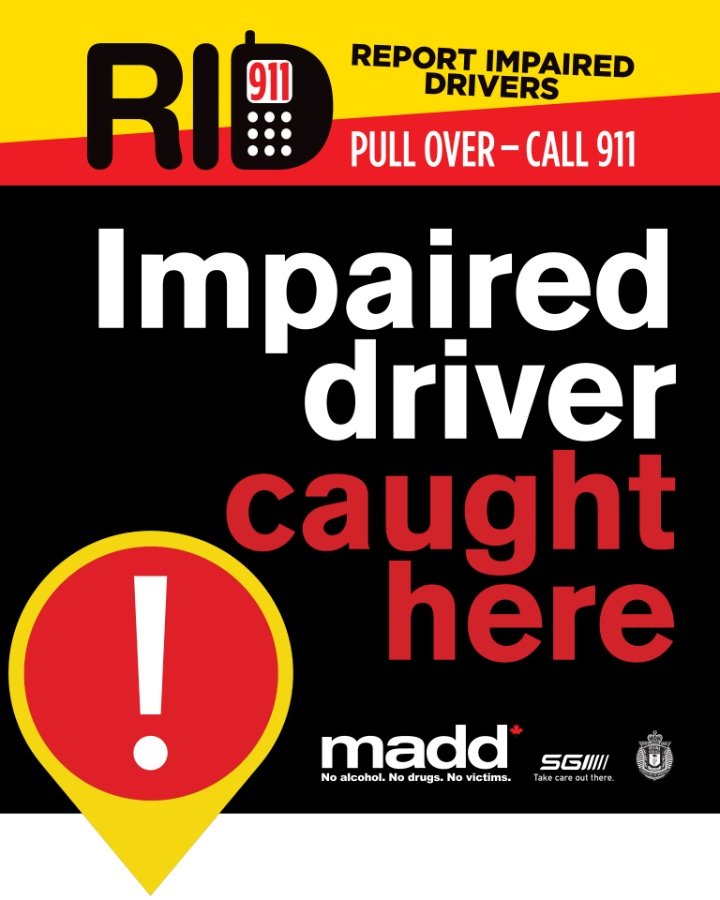 Campaign 911 and Call 911 programs – which encourage the public to call 911 to report suspected impaired drivers work!

Every week, there are news reports detailing impaired driving charges laid after police received tips from the public.

In Saskatchewan, a mobile sign program is further illustrating the effectiveness of that province’s Report Impaired Drivers (RID) Program. The program marked its 10th anniversary in March 2020. Over those 10 years, tips from the public have resulted in nearly 2,900 Criminal Code impaired driving charges, and nearly 600 roadside suspensions. (Read more.)

Now, in partnership with local police and Saskatchewan Government Insurance (SGI), MADD Canada’s Saskatchewan Chapters and Community Leaders are placing mobile signs at locations where police pulled over and criminally charged impaired drivers, thanks to 911 calls from the public. The mobile signs will be moved to new locations each week based on new impaired driving charges.

The signs serve to educate the public that they have an important role to play in helping police get impaired drivers off the roads, and that police want them to call 911 if they see drivers they suspect are impaired by alcohol and/or drugs. The public can see firsthand that their calls make a difference! The signs also act as a deterrent to anyone who would ignore the law and take the risk of driving impaired.

The signs are currently being placed throughout Estevan and Regina, with plans to expand to other communities throughout the province.

MADD Canada thanks SGI and the Estevan and Regina Police Services for their partnership in this effort to raise awareness about the importance and benefits of RID and Call 911 programs.

Q. Why have these signs been put up in my neighbourhood?

A. These mobile signs are placed in different locations every week to denote spots where impaired drivers were pulled over and criminally charged by police following a 911 tip from the public. The purpose is to encourage people to call 911 to report suspected impaired drivers because it’s an important way to help police get these dangerous drivers off our roads.

Q. Are the signs actually put in a place where an impaired driver was caught and charged?

Q. Can you give me the name of the person who was caught driving impaired?

A. MADD Canada cannot provide that information, however Criminal Code charges are filed with the courts as a matter of public record.

Q. Can I actually call 911 if I believe someone is driving impaired?

A. Yes. The police encourage members of the public to call 911 if they see a driver they suspect is impaired. This is an important way that police can locate impaired drivers and intervene before a crash occurs. Police urge drivers to call 911 when safe to do so. Pull over when you can and call 911, or, if you have a passenger in your vehicle, have them call. Police will ask you to provide information about the car and driver, direction of travel, etc. Here’s a depiction of how a call to 911 to report a suspect impaired driver might go.

Q. Where is this program running?

A. The signs are currently in Estevan and Regina, with plans to expand the program in other communities.

A. Yes, we hear regularly from members of the public who have seen the signs. They are a great reminder to the public encouraging them to call 911 to report suspected impaired drivers. The public can see first hand that their calls make a difference! The signs also act as a deterrent to anyone who would ignore the law and take the risk of driving impaired.