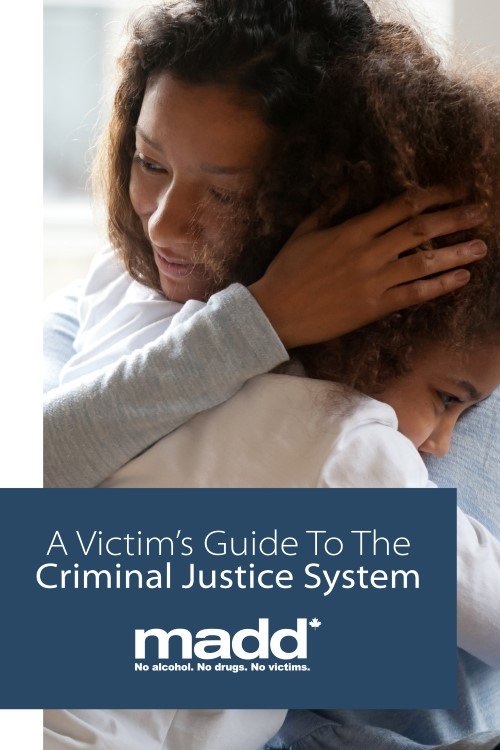 Learn more.
We’re hosting a national webinar on May 30 about Memorializing and Honour Loves Ones.
Learn more.

MADD Canada has many informative print publications and online resources to help victims/survivors of impaired driving.

MADD Canada’s brochure series (PDF format) provides information on a variety of topics and issues which victims/survivors of impaired driving may face:

This guide is intended to assist victims of federal offenders (in other words, offenders who have received a sentence of two years or more or who are under the jurisdiction of the Correctional Service of Canada or the Parole Board of Canada) Published by The National Office for Victims (NOV), Public Safety Canada, this guide outlines federal legislation that impacts victims of crime, such as amendments to the type of information a registered victim may receive about the offender who harmed them.

To assist the many victims/survivors injured as a result of impaired driving, MADD Canada has developed a specific Injury Resources Listing (PDF). This is a comprehensive list of supportive agencies across Canada that will assist victims/survivors who are suffering from brain injuries, spinal cord injuries and physical disabilities.

A variety of books, video and audio cassettes on a diverse range of victim-focused subjects are available for you to borrow from our National Office. If you would like to borrow materials, please contact the Victim Services Manager for your region:

Sentencing for impaired driving, particularly for the most serious offence of impaired driving causing death, can be complicated and complex. A number of factors impact the sentence, including number of aggravating and mitigating factors, plea deals, issues related to evidence/breath test results, judge’s discretion, whether the offender has previous convictions, etc. Sentences for impaired driving causing death have become longer over the past 15 years; it used to be common for a conviction of impaired driving causing death to result in a sentence of 2 years or less and often it was a conditional sentence, meaning the offender could serve it at home instead of being imprisoned. However, improvements are still needed. Today, most sentences still fall far too short and fail to represent any real justice for the victims and their families. MADD Canada’s Sentencing Framework for Impaired Driving offers information on sentencing principles of the Canadian justice system and our recommended sentencing range.