MADD Canada’s Citizen of Distinction Award is presented to individuals or groups or organizations that have made a major contribution to the anti-drinking and driving movement in Canada. To qualify for this award, the individual, group or organization should belong to one or more of the categories i.e. Research, Prevention and/or Education, Legal Issues and Victim Issues. This award is limited to a total of five (5) awards per calendar year. 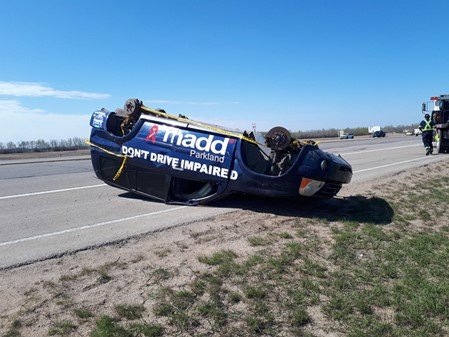 Dedicated to road safety, the Alberta Transportation Office of Traffic Safety continually strives to develop innovative, impactful ways to educate the public about not driving impaired.

This year, they approached MADD Parkland Chapter with an idea for a new awareness project – to have a crashed car on display to illustrate the consequences of driving impaired by alcohol or drugs. A real crashed car, wrapped with a message about not driving impaired, was towed to various locations in the community. The display provides drivers with a strong visual reminder about the dangers and consequences of impaired driving. It is an eye-opening display that makes people stop and think, and is a conversation-starter for families and friends. The smashed car moves every 2 weeks to a new high-traffic area, increasing the number of people who see it.

This project has sent a very impactful message to the community about impaired driving. It is also very moving for victims/survivors, many of whom have reached out to MADD Canada to express their thanks for this powerful display that shines a spotlight on the problem of impaired driving.

The Honourable Jody Wilson-Raybould, Minister of Justice and Attorney General of Canada

Dr. Irwin Cohen from Vancouver, BC Karen Middlecote from Toronto, ON Joan McLeod from Edmonton, AB

In 2000, MADD Canada recognized four individuals as the organization’s early pioneers who played a significant role in getting the various regional anti-drinking and driving movements organized in Canada. These four individuals are not an exclusive list to the pioneer classification.